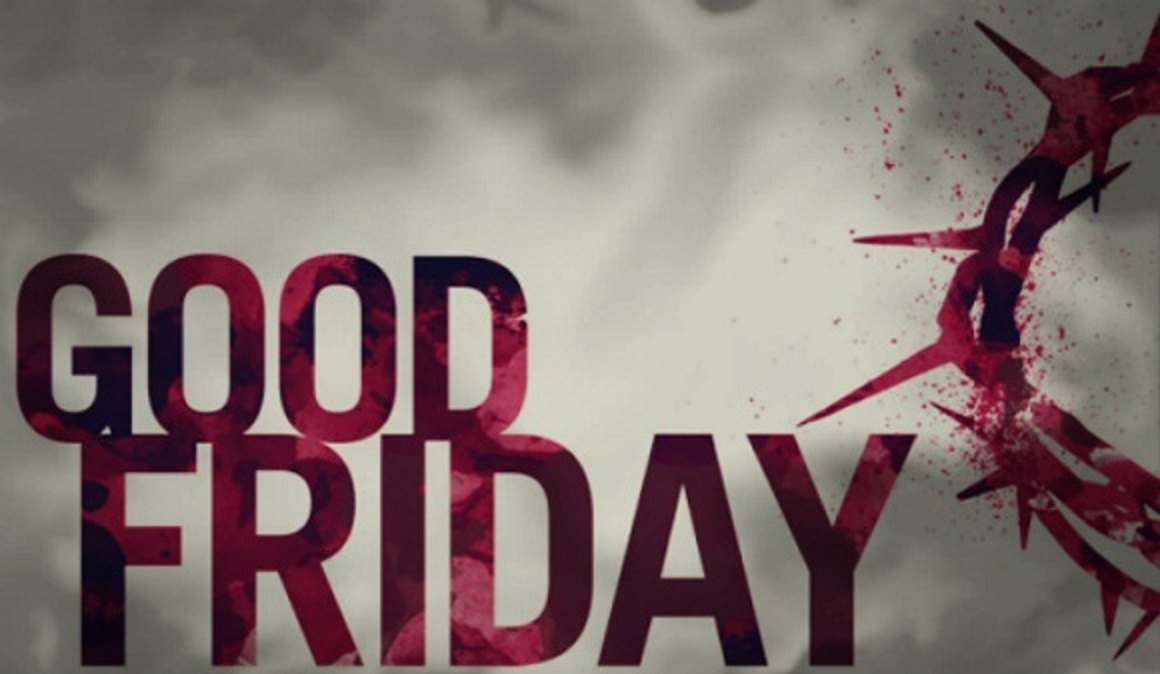 I just want to say thank you to Dean for reading Scripture, Helena and Stephanie for leading the singing, and to all of you for tuning in to our service. It’s a privilege to spend Good Friday with each one of you. Even though we can’t see you, it’s good to know that we can still celebrate this day, together.

But Good Friday is an interesting name, isn’t it? We are gathering together on this day to remember and celebrate the death of our Lord Jesus Christ. What we have read in the Scriptures and what we have sung about is how Jesus would suffer an excruciating and humiliating death on a cross. What’s good about that?

There are some people who wear a cross around their neck. They wear these as symbols of hope, while others find it offensive, likening it to wearing an electric chair or a guillotine around your neck. It’s why the apostle Paul, in his letter to the church in Corinth, writes, in 1 Corinthians 1:18, “For the word of the cross is folly to those who are perishing, but to us who are being saved it is the power of God.”

The reason we can sing about the wondrous cross is because, for those who have been saved, it is the power of God. It might seem strange and offensive to those who are perishing, but when you consider who was on the cross and what He did on our behalf, it helps to understand what makes Good Friday, good.

You may have noticed this as it was being read, but as Jesus is on the cross, suffering in the most excruciating way imaginable, it says that “a jar full of sour wine stood there, so they put a sponge full of the sour wine on a hyssop branch and held it to his mouth. When Jesus had received the sour wine, he said, ‘It is finished,’ and he bowed his head and gave up his spirit.”

You see, you and I have this problem called sin. Ever since the first man and first woman disobeyed God by eating of the fruit of the tree of the knowledge of good and evil—the one tree in the Garden of Eden from which they were to not eat—each one of us has been born with a natural tendency to rebel against God. It’s called a sin nature. This means that, from the moment of conception, we do not naturally follow God and His Law. We naturally want to do our own thing and be our own god, and as such, we live in rebellion to the One True God.

So, you and I have this natural problem of sin that we are unable to escape, but then, here is our predicament: Romans 2:5-6 says that “because of your hard and impenitent heart you are storing up wrath for yourself on the day of wrath when God's righteous judgment will be revealed. He will render to each one according to his works.”

Our predicament is this: We all stand condemned before a holy and righteous God, on account of our crimes of rebellion against Him. Despite our best efforts, there is nothing we can do to fix the issue of sin. We have a sin debt against us that we cannot pay. If it were not for the grace and mercy of God, we would be entirely deserving of God’s righteous justice.

But God sent His Son to this world, in the Person of Jesus Christ, and Jesus would live the perfect, sinless life, that you and I were always intended to live, but couldn’t live on account of our sin nature. And Jesus would go to the cross, and He would suffer at the hands of lawless men, in order to save us from the wrath of God against our sin.

We need to understand something about God. God’s righteousness—His complete perfection and holiness—demands that sin be dealt with. A holy God cannot be in the presence of sin. In order for us to be cleansed of our sin and for our sin debt to be paid in full, every sin—past, present and future—had to be put upon Jesus. Thus, Jesus would satisfy the wrath of God against our sin.

J. I. Packer writes, “Between us sinners and the thunderclouds of divine wrath stands the cross of the Lord Jesus.” This is why Jesus cries out, “It is finished.” It’s not a cry of defeat; it’s a cry of victory. He accomplished on our behalf what we could never have accomplished on our own.

When God said to the serpent, in Genesis 3:15, that the offspring of the woman “shall bruise your head, and you shall bruise his heel,” Jesus is saying, “It is finished.” The claim that Satan had on us, on account of our sin, is finished.

When the priests would perform the sacrifices for sin in the Tabernacle and later in the Temple, Jesus is saying, “It is finished.” Our sin debt has been paid in full. The once for all sacrifice for sin has been made.

So, what do we do with this? What is our response to this good news that Jesus has satisfied the justice of God against our sin that was coming our way?

I can tell you what our response often tends to be. We often try to add to what has already been finished. What do I mean by that? Well, at one point in Jesus’ ministry, Jesus comes across a rich young man who asks Him what he must do to inherit eternal life. This young man had done his best at keeping God’s Law, but he just wanted to make sure that there wasn’t something more that he needed to do to be right with God.

And church, this is adding to what Jesus has already declared finished. The work has been done. Nothing I do and nothing you do can add to what Jesus has already accomplished. It is enough. It is sufficient. “It is finished.” It isn’t by our merits that we are made right before God; it is by the merits of Christ. It isn’t because of anything we have done that saves us; it is by the grace of God through faith in Christ that saves us.

And so, how are we to respond to the finished work of Christ on the cross? We must receive the forgiveness of our sins by faith in the substitutionary death of Jesus. He has made the way for us to be saved from condemnation. If we do not rest in the finished work of Jesus, then we stand condemned and face eternal punishment in hell for our crimes of rebellion against a holy God. But for those who put their faith in Jesus, there is already now no condemnation.

In verse 2 of the song, How Deep the Father’s Love for Us, it says, “Behold the Man upon a cross, my guilt upon His shoulders, ashamed I hear my mocking voice, call out among the scoffers. It was my sin that held Him there, until it was accomplished. His dying breath has brought me life. I know that it is finished.”

Do you know that it is finished? The reason why today is called Good Friday is because of Jesus and what He did on that cross. If you do not know this, then I encourage you to make this decision, today. Wherever you are, however you are watching this, if you do not know the forgiveness of your sins offered to you in Jesus, then I encourage you to receive forgiveness, today.

The apostle Paul, in Philippians 1:6 writes, “And I am sure of this, that he who began a good work in you will bring it to completion at the day of Jesus Christ.” What that means is that, if you have confessed with your mouth that Jesus is Lord, if you are a follower of Jesus, then God has unfinished business with you. He is not done with you, yet.

But God cannot bring to completion the good work that He began in you, if you have not submitted your life to Him. If you want the hope, the forgiveness, the eternal life that is being offered to you today in Christ Jesus, you can receive that now. You can confess your sins to God right now and receive that forgiveness.

Good Friday might not seem good. It might not seem victorious. It might seem bleak. It might seem hopeless. But Sunday is right around the corner. Three days later, Jesus would rise from the dead, in victory over sin and death. The tomb that He was placed in would be empty. The payment that He made on our behalf on the cross would be validated by the resurrection.

This is what makes Good Friday, really good. And this is why you are going to want to tune in on Sunday. We will be having an online church service this Sunday at 11:00 am, where you will be able to watch in the same way that you are watching now. And I just encourage you to join us as we celebrate the resurrection of Jesus from the dead.

But that concludes our Good Friday Service. I’m just going to close our time together in prayer and a short benediction, and then we will sign off. Let’s pray…

Now, for the benediction: May Jesus Christ, who for our sake became obedient unto death, even death on a cross, keep you and strengthen you, now and forever. Amen.